I recently received my amateur radio general license and setup my station. One of the first formats I was interested in was JT65, as it provides good reception, even with poor signals, and it has a fairly structured format which makes it a bit easier to start with. So, what is JT65? From Wikipedia:

JT65, developed and released in late 2003,[3] is intended for extremely weak but slowly varying signals, such as those found on troposcatter or Earth-Moon-Earth (EME, or “moonbounce”) paths.[2] It can decode signals many decibels below the noise floor in a 2500 Hz band (note that SNR in a 2500 Hz band is approximately 28 dB lower than SNR in a 4 Hz band, which is closer to the channel bandwidth of an individual JT65 tone), and can often allow amateurs to successfully exchange contact information without signals being audible to the human ear. Like the other modes, multiple-frequency shift keying is employed; unlike the other modes, messages are transmitted as atomic units after being compressed and then encoded with a process known as forward error correction (or “FEC”). The FEC adds redundancy to the data, such that all of a message may be successfully recovered even if some bits are not received by the receiver. (The particular code used for JT65 is Reed-Solomon.) Because of this FEC process, messages are either decoded correctly or not decoded at all, with very high probability. After messages are encoded, they are transmitted using MFSK with 65 tones.

Operators have also begun using the JT65 mode for contacts on the HF bands, often using QRP (very low transmit power); while the mode was not originally intended for such use, its popularity has resulted in several new features being added to WSJT in order to facilitate HF operation.

After I made my first two contacts (QSOs), I shared with my friends on facebook. One of my friends was curious how the message exchange actually works, and I thought it would be useful to write it up as a general reference for understanding the JT65 message format, and contact exchange structure.

JT65 is a very structured format. Each message can contain 13 characters, and takes a little under a minute to transmit. This means that one person will send on even minutes, and one will send on odd minutes. It also means there is not much opportunity to send free form text (although you can send a small amount at the end).

Here is a screen shot of some JT65 activity, including two contacts (listed on the right). 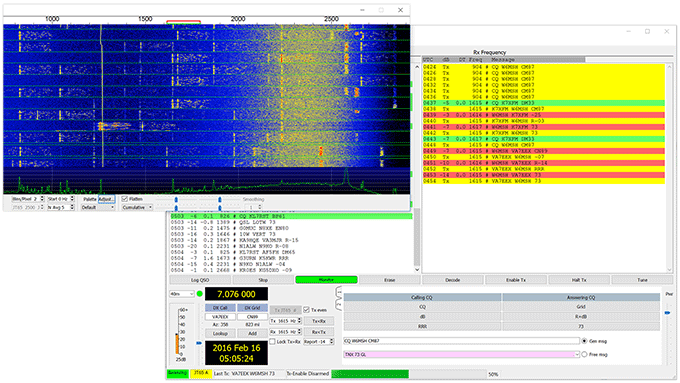 Lets look at one of the exchanges, and walk through it step by step to get a better understanding of what is going on.

Lets step through one of the contacts where I put out a call to contact with someone else.

First, with the exception of the call for CQ, the format of each message is:
<TO> : <FROM> : <MESSAGE>

Couple of things to notice. First, based on the signal reports, you can see that I was receiving VA7EEX’s signal much better than he was receiving mine (about 4 times stronger). This is probably because I was transmitting on a frequency / band (40 meters) with an antenna that is not tuned for that band.

Also notice that there is not really much room for free-form text. The only real exception is in the last messages where you could include some text (keeping in mind it is limited to 13 chars, and you should include 73 to make it clear you are done with the contact).

Hopefully this is useful in understanding the format. I find it is a good digital format to start with, as the messages and contact exchange is very structured (and a lot of it is largely automated), which reduces the changes of getting something wrong.

You can find some more information on JT65 here.