Getting Started with Phidgets and ActionScript 3

Phidgets are a set of devices and sensors that provide a simple way for developers to create applications that both send and receiving information from external sensors, motors and pretty much anything else you can hook up via electronics. They are similar to the open source Arduino electronic platform.

Im not going to do a big comparison between Arduino and Phidgets in this post. I plan to do that in another post (along with an Arduino / Flash hello world article). Suffice it to say though, that one of the major benefits of Phidgets, is that the Phidgets devices are a bit higher level, both on the hardware, and software side and thus can be a little easier for a developer new to electronics to get started with.

In this post, I will cover everything you need to know in order to get started integrating Phidgets electronics and Flash / ActionScript content.

You can grab all of the code for the example from my GitHub Example repository.

First, here is what you will need to get started:

First, download and install the Phidgets drivers for your platform. This will install the drivers to interface with the devices via USB, and will also install a standalone application / server that will proxy calls between Flash and the devices.

Once you have installed the drivers, download the manual for the 1018 - PhidgetInterfaceKit 8/8/8. I strongly recommend you read through the entire PDF document, but at a minimum, you will want to read the “Product Features” and “Getting Started”” sections.

Connect your Phidget via USB to your computer and then read and follow the steps under the Getting Started > Testing section in the 1018 docs. This will show you how to ensure that your Phidgets and software are setup and functioning correctly. Make sure to run the sample program as described in the docs. 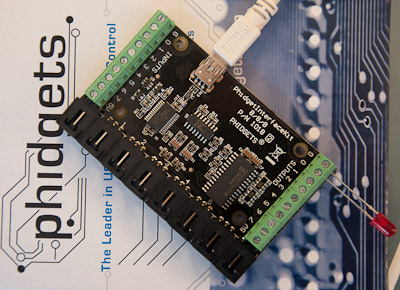 Next, make sure that the Phidget is connected to the computer via USB. You can test that everything is connected and hooked up correctly by opening the Phidget preferences, and selecting output 0 on the Phidget Interface Kit screen. This should turn on the LED (make sure to turn it off once you are done). 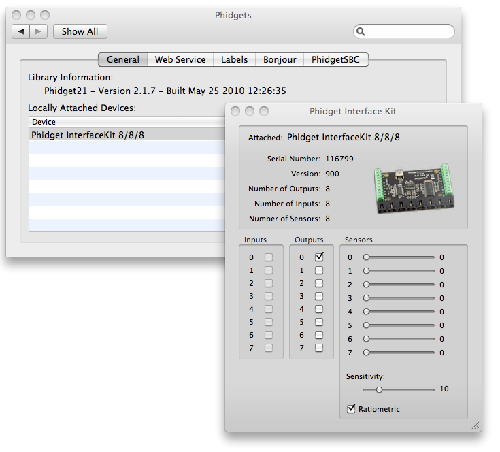 The last step before we can write our code is to make sure that the Phidget proxy / web server is running. This is a simple socket server that runs locally and proxies calls between Flash and the Phidget.

On Mac, you can start this in System Preferences > Phidgets > Web Service > Start Web Service. Check the documentation for how to start it on other platforms.

For now you can leave the ServerID and Password blank, and leave the port at its default value of “5001”.

We are finally ready to write the ActionScript code to interface with the Phidget.

Open you ActionScript editor, and type in the following code in a file named PhidgetsHelloWorld.as. The code below is fully commented and explains what is going on.

I am going to run this via ADL (Adobe AIR) included in the Flex SDK, and thus also need the following PhidgetHelloWorld-app.xml file:

I am running it via ADL / Adobe AIR as it will easily allow me to see the trace output on the command line.

Here is the command to compile the program using MXMLC:

You may receive a warning about runtime shared libraries. You can safely ignore this.

If you get an error that mxmlc cant be found, then make sure you have added the FLEXSDK/bin directory to your system’s path.

If you receive any errors, make sure you are linking in the Phidget library correctly. Once it compiles, you can test it on the command line with the following command:

When I run this on my machine the LED turns on on the Phidget, and I get the following output on the command line:

Notice that once you close the program, the LED is still on. You have to explicitly turn off the LED. You can do this by modifying the code to turn it off, and then run it again.

This is an important point. The device may maintain its state even after the program has stopped running. Because of this, you should always set the device to a known state when your application starts up, and make sure it is in the correct state when you shut down your program.

Once you are at this point, it is just a matter of hooking up additional sensors, motors and outputs. The Phidgets ActionScript library is very well written, and makes it easy to work with additional Phidgets.

If you find any errors, or have any questions or suggestions, then please leave them in the comments.